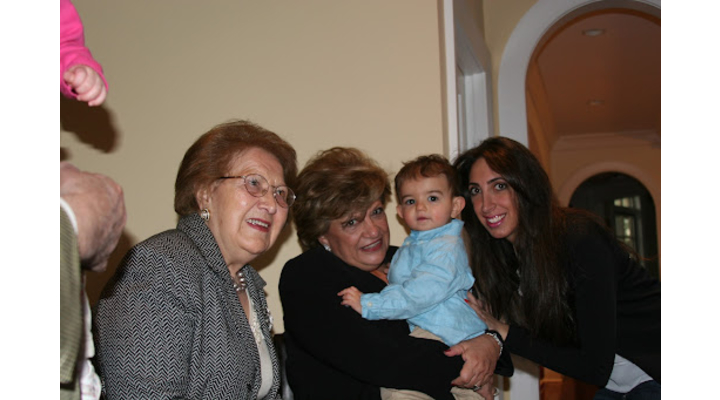 This blog encompasses the story of a an Persian American family and their ancestors who rest with us at Mount Hebron. It is a touching story written by, our Legacy Project intern, Maya Mehrera about her grandmother's legacy of love and family tradition. .

A large part of my identity has always been that I am a first-generation American on my father’s side. His parents and grandparents immigrated to the United States in the 1960s and 70s, searching for more opportunities for their children, grandchildren, and great-grandchildren. My great-grandparents were the first to take the leap, (or the boat if you will), and come to America. This is their story.

My Mahinjoon. The tiny Iranian woman who always wore a welcoming smile and had her arms wide open for a cozy hug. Every time I walked into my grandparents’ house, she would usher me into her arms and whisper endearments in my ear Farsi, calling me precious and sweet in a language that after all those years, remained foreign to my untrained tongue. After minutes of holding me close, she would let me go with a kiss on the cheek, and a piece of her heart in my hand. Although she was small in stature, her love knew no bounds. 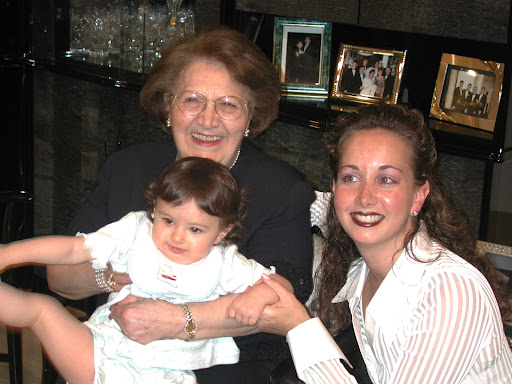 My great-grandmother Mahinjoon alongside my mother, Nirit Rosenblum, holding me as a baby. Early memories of being with my Iranian side of the family circulate around being at my grandparents’ house for the Jewish high holidays, and running and sliding around on the tile floors with my cousins, laughing gleefully. My grandmother Jilajoon would make enough food for an army, and the Middle Eastern stews were so strong, you could often smell the cumin and okra from her driveway. My cousins and I would scarf down oily, crunchy rice chips (tahdig), and we would beg my grandmother for rose-flavored ice cream for dessert. At every holiday, my grandfather, who we lovingly call Babajoon, would ask me to sing the Israeli national anthem, “the Hatikvah.” After I would perform for my whole family, Mahinjoon would be the first to praise me and envelop me in kindness.

Other than these holiday gatherings and extravagant Persian weddings, I didn’t have much knowledge about Iranian culture and why my family immigrated to the United States. This was until I grew old enough to become curious and subsequently voice my curiosity. I began by asking my father to tell me about his experience coming to the United States when he was ten years old and then asked about why my family chose to leave everything behind and come here. My father, uncles, and grandparents immigrated to the United States in 1978, just prior to the Iranian Revolution in 1979. After fleeing a country filled with social and political unrest, my young father and two uncles entered a foreign country in which they didn’t know the language and had never been before. They left all of their belongings behind, only bringing what they could carry. From what my father and grandfather Babajoon have told me, they came to the United States for work and educational opportunities. As Jews living in Iran, they felt that they couldn’t aspire to achieve much. In my grandparents’ eyes, the U.S. was a land filled with opportunity for all who dared to dream.

My great-grandparents, Mahinjoon and Joseph (my father’s Babajoon), held similar beliefs to my grandparents and also ventured to leave their homeland and immigrated to the United States. Mahinjoon and Joseph were the first in our family to leave their comfortable Persian cocoon and immigrated to the U.S. in 1974. My great-grandparents, along with my great-uncle Eddie and my great-aunts Shahla, Vida, and Affie, first arrived in New York and began running a haberdashery in Queens. My great-uncle Jackie had come to the U.S. before his parents, and Joseph had brothers living in Tucson and San Diego (they came in the 1950s), so thankfully they had family in their adopted homeland.

Before coming to the United States, my grandparents had lived seemingly full lives in Iran. Mahinjoon was born on July 3, 1926, and Joseph on April 26, 1914. My great-grandparents were married in 1941 when Mahinjoon was 15 and Joseph was 27, and just a year later, they welcomed my grandmother, Jilajoon. Although they were not close in age, my great-grandparents were the perfect match and remained happily married for 60 years. Soon after having my grandmother, they welcomed five more little ones, including three girls and two boys, and had a full brood of children that grew up in a flash. After most of their children were grown, my great-grandparents decided to dash it all and move across the world to a new land filled with new opportunities for their family. After settling in Queens for a year, Mahinjoon and Joseph moved to Great Neck Long Island, where they remained for the rest of their days.

Over the years, Mahinjoon and Joseph welcomed several grandchildren, and dozens of great-grandchildren. Their family grew into what would be described by non-Persians as a “small community,” but to us, it is just family. There were several glittering weddings, baby showers, and the annual chaotic family gatherings for the high holidays. My great-grandparents spent decades in the United States with their ever-growing family, loving, laughing, and living life to the fullest every day. 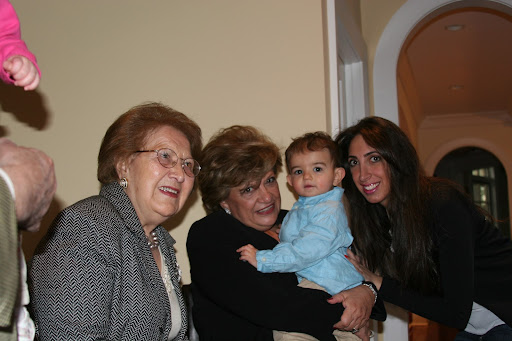 Mahinjoon with Sharon Moradifar and her daughter, Jila, holding my baby brother, Noah. Sadly, Joseph passed just mere months before I was born, on May 3, 2000. I was lucky enough to have some wonderful years with my loving, caring Mahinjoon, but I never got to know my great-grandfather. From what I was told by my father and my grandparents, he was an imposing man with a gorgeous, low speaking voice that was unforgettable. He was wickedly funny, and loved playing mischievous tricks on people. Joseph enjoyed all family gatherings, and especially loved dancing with his beloved wife. Like my great-grandmother, he put his family above everything else and cherished his children and grandchildren.

Mahinjoon, like her husband, was quite the character. Despite her small stature and reserved manner, she had quite a personality hidden for only those she loved to see. She was a wonderful cook, and dearly loved preparing traditional Iranian meals filled with rice, meats, and stews for her family on Shabbat. I also later found out that she had a lovely singing voice which she passed down to me. Although Mahinjoon loved nearly every aspect of being a mother, grandmother, and great-grandmother, she chose to personalize her title. Rather than be called nanajoon (which means grandmother in Farsi), she chose to combine her own name “Mahin” with “joon” (which means dear). This inspired my grandmother to do the same thing, who we now all call Jilajoon. My Mahinjoon, as I remember her, never ran out of kisses for her family members. She loved all and always had a bright smile to share with everyone. She passed about five years ago, and I miss her sweet presence every day.

Although their bright lights have been absent from my life for quite some time, my great-grandparents are far from forgotten. Their legacy lives on at every Rosh Hashanah gathering, every Passover seder, and every Friday night dinner. Mahinjoon’s warm hugs and Joseph’s booming laughter live on in all of us. My great-grandparents live on through what they cherished the most- family. Because of their brave decision to take a leap of faith and immigrate to the United States, my family has been fortunate enough to find happiness, love, and success in this country. Because of my great-grandparents, I am here today living my life to the fullest, pursuing every dream I have no matter what obstacles are in my path. Mahinjoon and Joseph’s Iranian immigrant story has influenced so much of the young woman I am today, and I will be eternally grateful for what they did for our family. Their legacy will continue to live on as they dance together for the rest of time.